I chose to visit Poznan, Poland as the final stop on our Polish itinerary. Poland had already exceeded my expectations with Krakow, Warsaw, and Zakopane. Visiting Poznan was no exception. There are-plenty of things to do in Poznan, Poland and the beauty of the Poznan old town is off the charts! 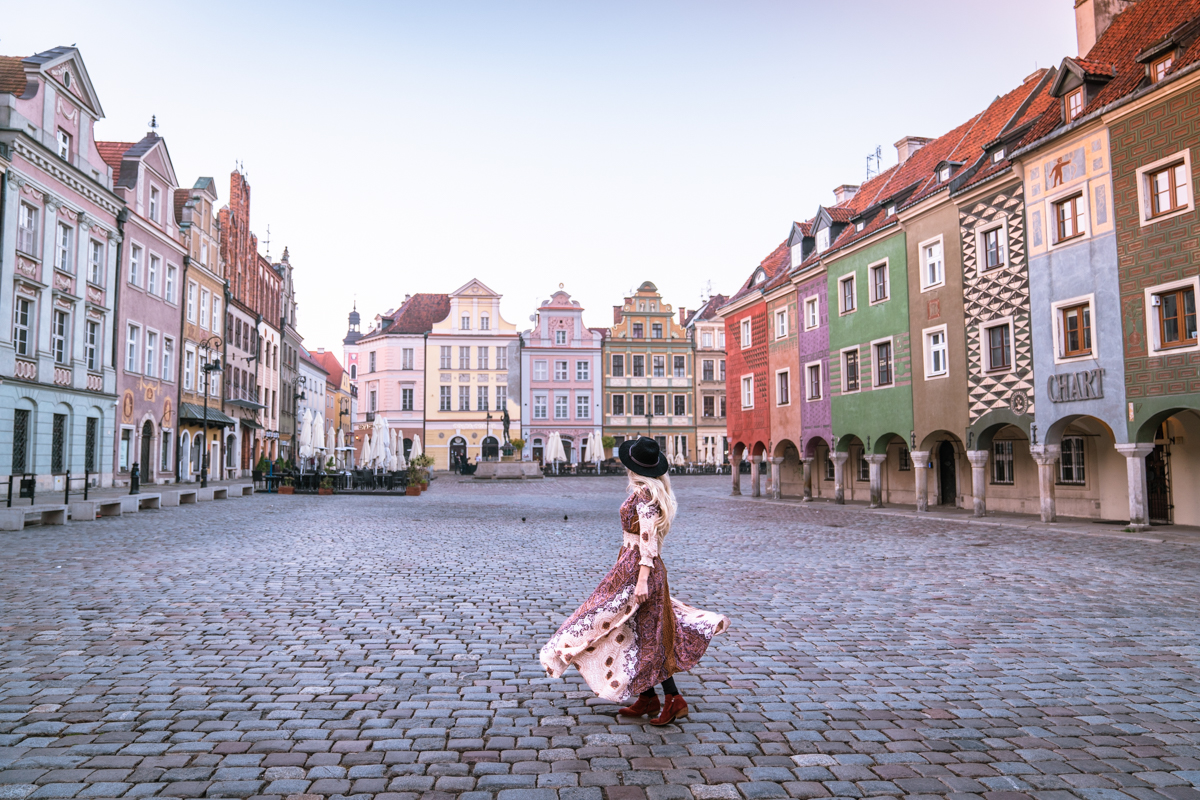 Poznan has fewer tourists than Warsaw and Krakow. It feels less like Disneyland and more like a place where locals actually live and hang out, however the old town is no less stunning or magical. And there are plenty of things to do in Poznan to keep you occupied. Similar to Warsaw, Poznan was mostly destroyed during World War 2 and rebuilt after the war.

How Long Should You Visit Poznan For?

We only had 2 nights and one full day in Poznan, which is a shame. But we had a private guide for most of the day showing us the majority of sights since I was working with the tourism board. It was rushed, and we covered a lot of miles, but Poznan is a very walkable city. I would recommend 2 days in Poznan at a minimum.

How to Get to Poznan, Poland

Poznan Glowny train station is probably the easiest way to get to Poznan with frequent daily service from other major Polish cities. Other major European cities easily connect to Poznan via Warsaw. Poznan has an airport not far from the city center with domestic and international connections as well. There is also a vast bus network that connectss local, regional, and distant areas of Poland.

Where to Stay in Poznan, Poland

I pretty much always recommend staying in the city center where the old town is and Poznan is no exception. How adorable is this square?

City Solei Boutique Hotel – We had the pleasure of staying here and really enjoyed it. It was within just a few minutes walk to the old town square. The hotel has a colorful funky vibe which is fun. Overall rating on Booking.com is a 9.3.

Brovaria – This beautiful classic hotel is right in the heart of the market square. The location rating is a 9.8. I would love to stay here if I visited Poznan again.

Hotel Palazzo Rosso – Just steps from the beautiful St. Stanislaus Church, this wonderfully located hotel is set in a renovated historical building in the old town.

Each of the following apartments provide a small kitchen and are excellently located in the heart of the old town. The ratings are all exceptional in all areas.

Things to do in Poznan 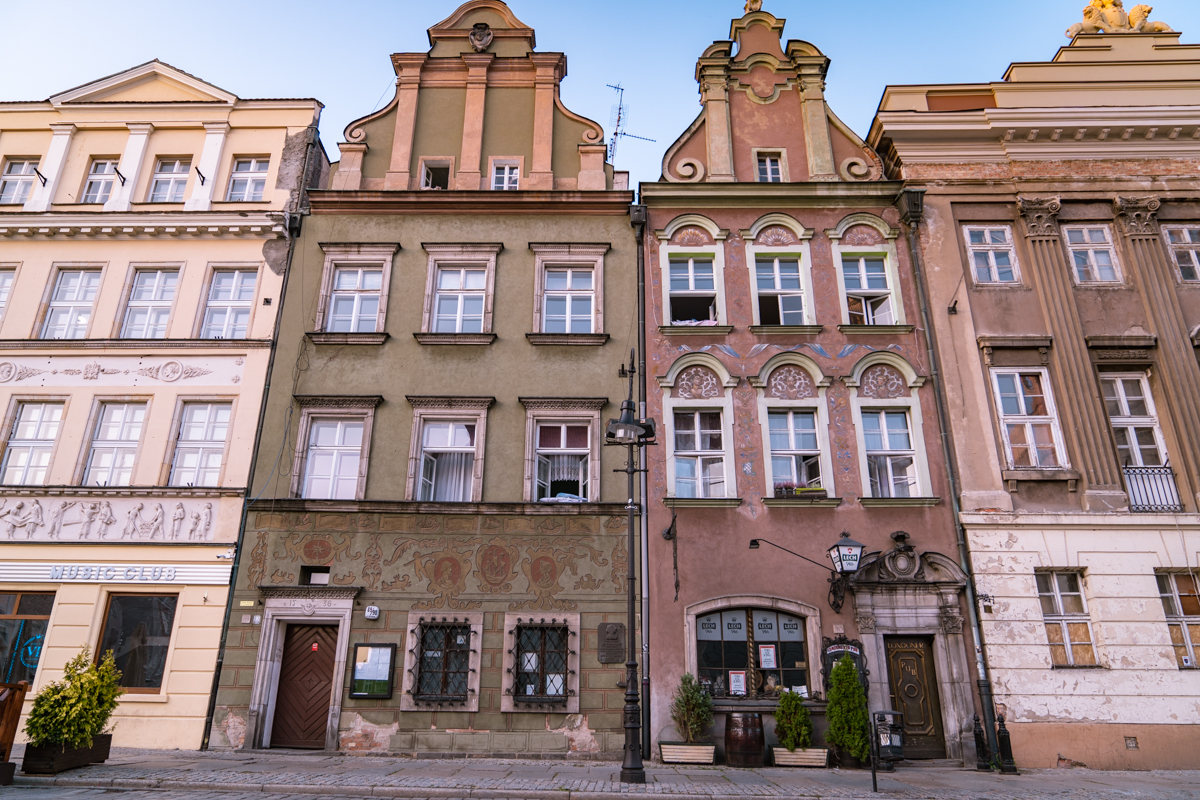 There are plenty of things to do in Poznan and sights to be dazzled by. Poznan is often considered the birthplace of Poland and the oldest Polish city. The renaissance square is about as beautiful as a town square gets with its medieval apartments stacked neatly together, adorned with intricate details and colorful pastel paint. There are tons of restaurants, cafes, and little shops to check out.

Every day just before noon in Poznan, crowds will gather in the Market Square in front of town hall to watch the centuries old portrayal of the legend of the fighting goats. No, you don’t need to start a petition or inform PETA…these are mechanical goats.

Beginning in 1551 (with a long break from 1675 until 1913 due to tower damage), the two mechanical goats have emerged at 12 noon from the clocktower to butt heads 12 times while the bell chimes. The legend says a cook preparing a meal for a banquet burned the deer he was cooking, and went into a nearby meadow to grab two goats as a replacement. The goats ran away and up into the town hall, emerging at the top fighting and butting heads. This drew the attention of the townspeople and the spectacle was so amusing, the goats and cook were pardoned.

Admittedly, the anticipation and crowd was more impressive than the actual mechanical goats display, and the event is rather underwhelming, but it’s amusing to learn the legend and history behind it. In the picture above, you can barely see the tiny goats in the middle tower below the arched window. Yeah, they’re that small. But it was adorable to see children in the crowd get excited and the gathering is festive and traditional.

The birthplace of the city of Poznan, and one of the main political centers of early Poland, Cathedral Island is a must visit in Poznan. Not surprisingly, the main attraction is the Cathedral, dating back to the 10th century. The crypts of the cathedral house the remains of some of the first kings of Poland as well as a stunning gold chapel. After numerous fires throughout the centuries, the final restoration took place in 1956 returning it to its Gothic style of the 14th and 15th centuries. You can cross this red metal bridge (Jordan Bridge) to get there.

Visit the Croissant Museum in Poznan

Visiting Poznan’s Croissant Museum was one of my favorite activities in Poznan, and I would highly recommend it to anyone, even if your visit to Poznan is short like mine. The St. Martin croissants have been the local traditional pastry for 150 years and are only made in this region. Literally – their recipe is protected by EU law!

The museum is located in an old renaissance tenement house in the market square across from the town hall. It is one of the few buildings that were not destroyed during WW2 and still contains the original renaissance ceilings and wall paintings. The views of the square from the large windows are fantastic.

The show is taught in Polish and English depending on the time, and you will learn the history of the famous croissant as well as take part in making them (and of course tasting them). The interactive show lasts approximately 45 minutes and can be booked at arrival. Show up to their door 10 minutes before show time and wait in front of the building (rear entrance). Visit their website for more information HERE. Want to try croissants as part of a food tour? Try this one:

Much more than just a shopping center, Stary Browar is a transformed historical building that once functioned as a brewery. From the mid to late 1800’s, a German brewer was running a very profitable business. During WW2, the Germans took it over and continued to manufacture beer until they had to use it as bunkers and a shelter, which resulted in it being largely destroyed. After the war and until the 1980’s, the building continued as a brewery but once closed, it deteriorated more.

In the late 90’s and early 2000’s, the property was acquired and developed into Stary Browar, opening in 2003 with more than 100 stores, restaurants, and offices. In 2005 it was named best shopping center in Europe and then Best Shopping Center in the world because of its unique architecture, art, and cultural incorporations. Since then, the center has won dozens of awards, offers workshops, concerts, theaters, exhibits, and more. This center is truly something to behold, and honestly kind of made me want to move to Poznan even more.

Not far from the old town, you can visit Poznan’s largest park to experience some tranquility. The 89 hectare green space is not only beautiful, but a historic monument with remnants of a military fort, a military museum, cemetery, the Heroes’ Monument, and art displays. You can walk there from the old town in around 30 minutes or catch a bus.

If you are interested to learn the ancient history of the birth of Poland, visit Poznan’s unique and modern interactive center. You won’t find artifacts here, but more of a multimedia presentation led by audioguides. Tours are led by the staff and you can choose between private or group. There are miniature replicas of cathedral island during it’s settlement, there is a life size replica of the gold cathedral, as well as a stained-glass room.

The Heritage Center is connected by a skywalk to Cathedral island, symbolizing the contrast between modern and ancient. A rooftop patio offers awesome views of Cathedral Island as well as the river down below, passed over by the skywalk bridge.

View looking back towards Cathedral Island from Brama Posnania rooftop

This church is in the old town, not far from the market square. To find what I think is the most beautiful, photogenic street in Poznan in front of the church, follow the most southeastern street leading away from the square and in two blocks you’ll be there. It’s pink, and it’s magnificent. It’s stunning inside too. This whole area right around the church is just a photographer’s (or, let’s face it, an Instagrammer’s) dream. The street name is Swietoslowska. 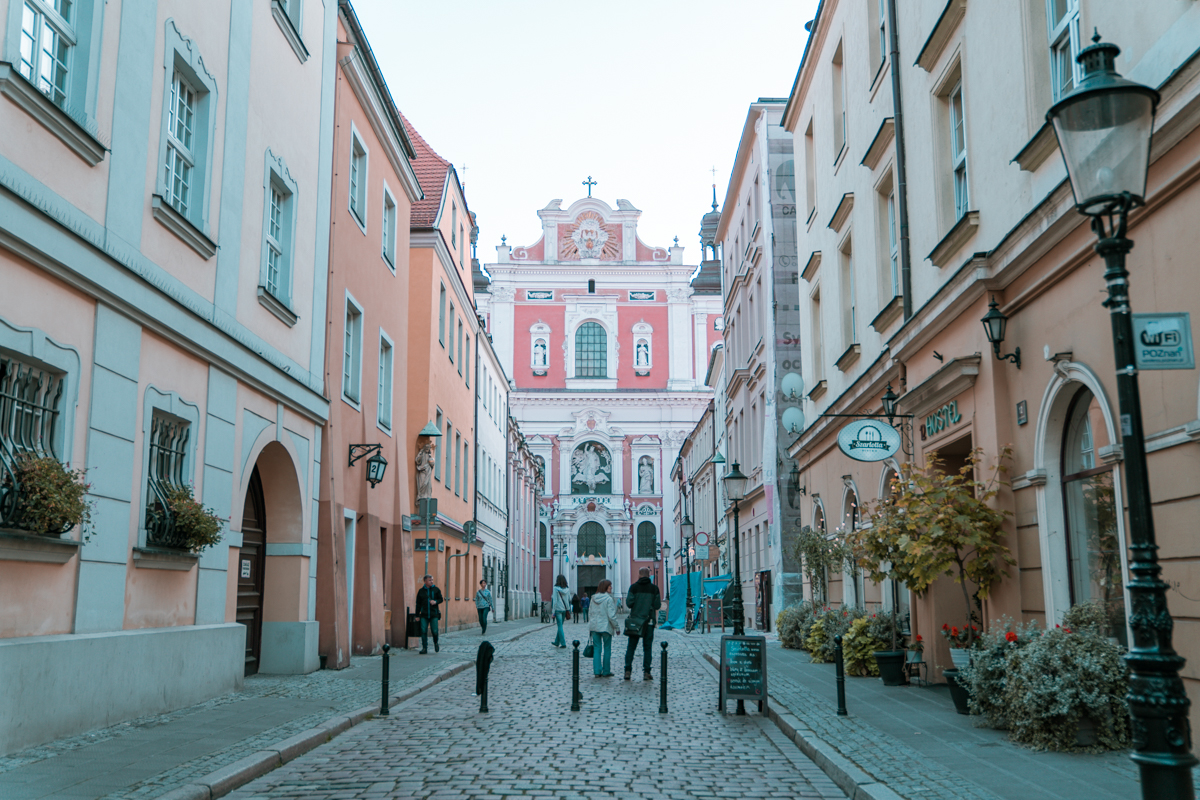 If you want to grab a bite at one of the most picture perfect spots in Poznan, look no farther than Weranda. It’s delicious with great reviews, has a very diverse menu, incredible decor, and the best backdrop.

Don’t judge me for putting a chocolatier shop on my “to do list” for a city. But I actually believe eating dessert should be a sport. This place makes the cut for one of my favorite hot chocolates of my life. Thick and creamy, with heaps of whipped topping and the cutest vibes inside, Cacao Republika goes down as one of the highlights of Poznan for me! It was a super romantic little place to go after dinner. You can find it just a block from the northwest corner of the market square.

Get Donuts at Stara Pączkarnia

I didn’t mean to put this much food on my Poznan list, but why not? These donuts are quite popular and delicious! This is actually a Polish donut chain, so you may see it in other Polish cities as well, and you’ll recognize it by the old fashioned pictures of ladies baking on the storefront along with a long queue out the door. The unconventional and unique flavors and fillings make it kind of a novelty to try, even if it’s not what you think of when you thing of typical Polish food.

That about wraps up my things to do when you visit Poznan, Poland! I hope you enjoyed this post and found it useful. I absolutely suggest visiting Poznan on your Poland itinerary. It was one of my favorite town squares and cities in Europe and had such a great food scene. And like all of Poland, it’s incredibly affordable and the people are lovely.

Want some other ideas?

Other articles you may enjoy:

This post was written in collaboration with the Polish National Tourist Office.

2 thoughts on “Visit Poznan: Things to do in Poznan, Poland”