No matter what your itinerary is, you can fit in a few hours to take one the most special and unique private tours Paris has to offer. Whether you’ll be in Paris for weeks, days, or mere hours, Cedric’s 2CV Paris Tours are sure to impress even the most seasoned tourist in Paris.

I usually hate layovers, and when I realized I’d booked a ticket home from Morocco that left me in Paris from 10pm to 10am, my first thought was “crap.” But then I remembered I am known for making the most of my time; it’s like my modus operandi. So I reached out to tour companies who offer private tours of Paris, but not just any tour. I wanted something unique, fun, classy, and  memorable. When I found Cedric’s 2CV Paris Tours, I knew I’d discovered the right people to make my first experience of Paris, albeit short, a perfect one. These are the best private tours of Paris you could imagine.

First, I contacted Cedric to ask if they’d be willing to consider a slightly unconventional, very late tour that would go into the wee hours of the morning. I’d had positive responses from other tour companies, but the personalized response I got from Cedric and his eagerness to make my one night in Paris a flawless one, solidified my decision to choose his company. The fact that their website has pictures of the four handsome Frenchmen for the guides and their beautiful cars didn’t hurt either.

I arrived in Paris even later than anticipated after an hour delay, but I’ve never been so enthusiastically greeted at midnight before. Cedric’s brother Chris, my tour guide, opened the door to his stunning green 1977 2CV named “Yuna,” helped me into the backseat, offered me a blanket if I was chilly, gave me box of Pierre Hermé macaroons, then whisked me around Paris. From my correspondence via email with Cedric, Chris knew I had a fetish with crêpes so our first stop was to feed me after flying for a few hours. A nutella and strawberry crêpe for the road, and we were on our way.

We cruised down the Avenue des Champs-Élysées to the Arc de Triomphe where I popped out of the roof to take pictures, and since there was very little traffic, we were able to stop by the arc and take pictures. Chris explained all the history behind the monuments and places we visited, including some secret facts about landmarks that many Parisians don’t even know. His enthusiasm and passion for his city was contagious!

Chris treated me to a rather unknown viewing location of the Eiffel Tower on the banks of the Seine, complete with a bottle of champagne. This particular evening, the Eiffel Tower was not lit up. In honor of the recent Manchester terrorist attacks, many iconic landmarks went dark for the night. As much of a bummer it was for photos, it was a solemn time to be there and the universal support for one another among nations of the world is beautiful. 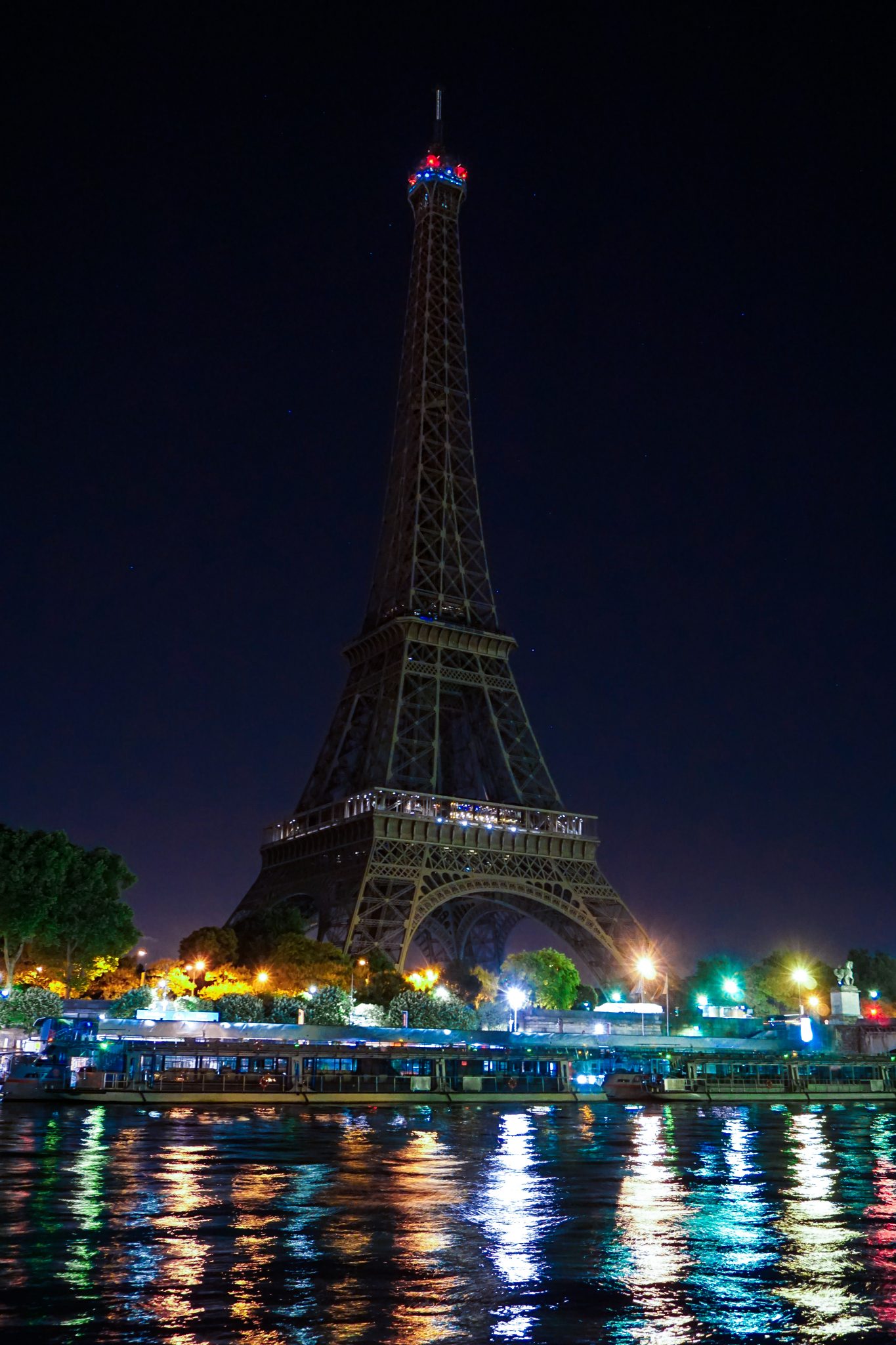 Our 2CV Paris tour took us to the Louvre (who’s lights shut off literally as I was clicking my second picture trying to dial in my settings), the Notre-Dame Cathedral, Place Vendome, one of the “love lock bridges” (which have only just become “a thing” in Paris since the mid 2000’s), and many more notable places that my brain simply can’t remember, since it was 2 a.m. after a long flight. There were so many beautiful streets and buildings, and it was magical seeing them at an hour when almost no one was around. 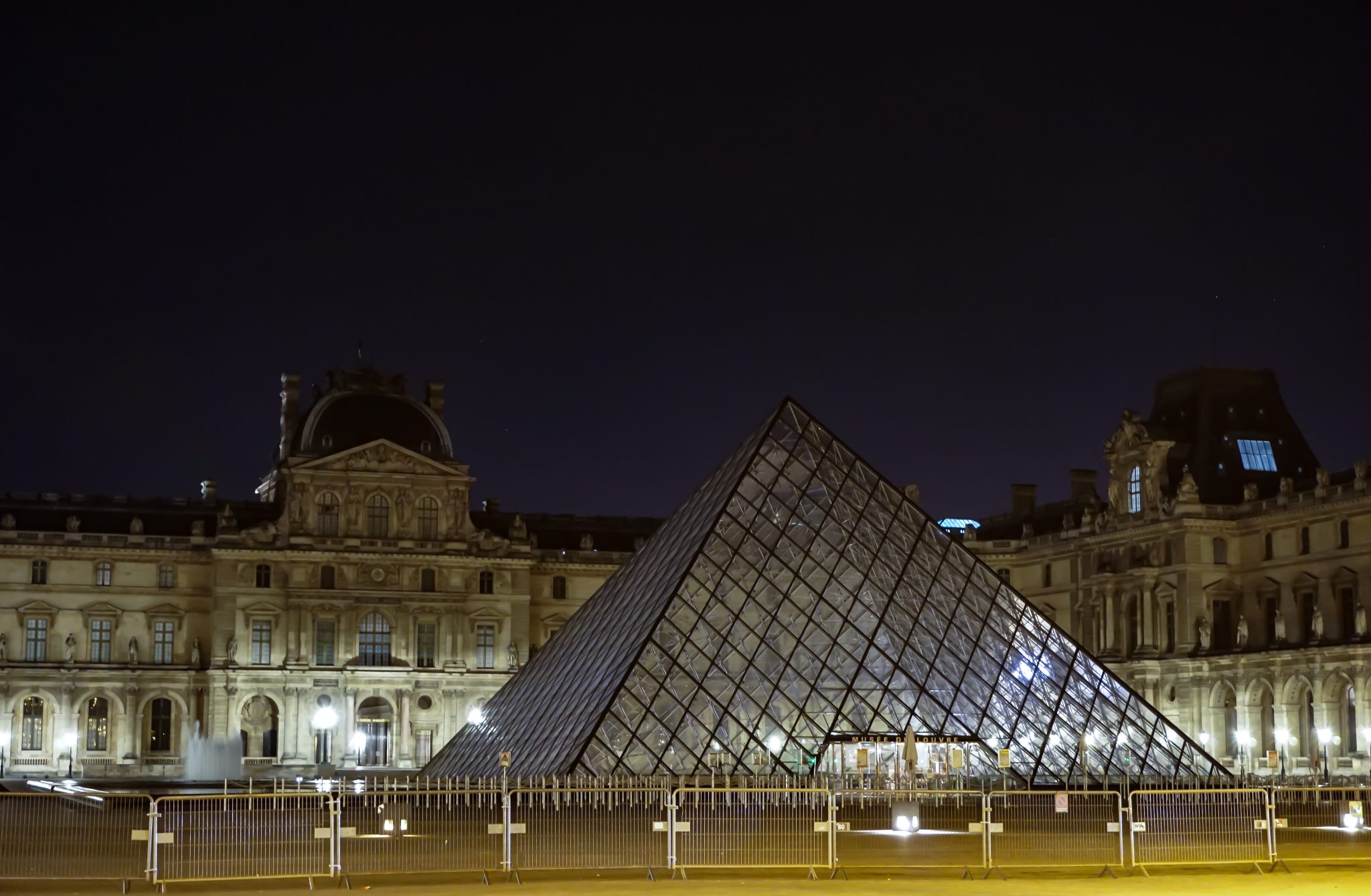 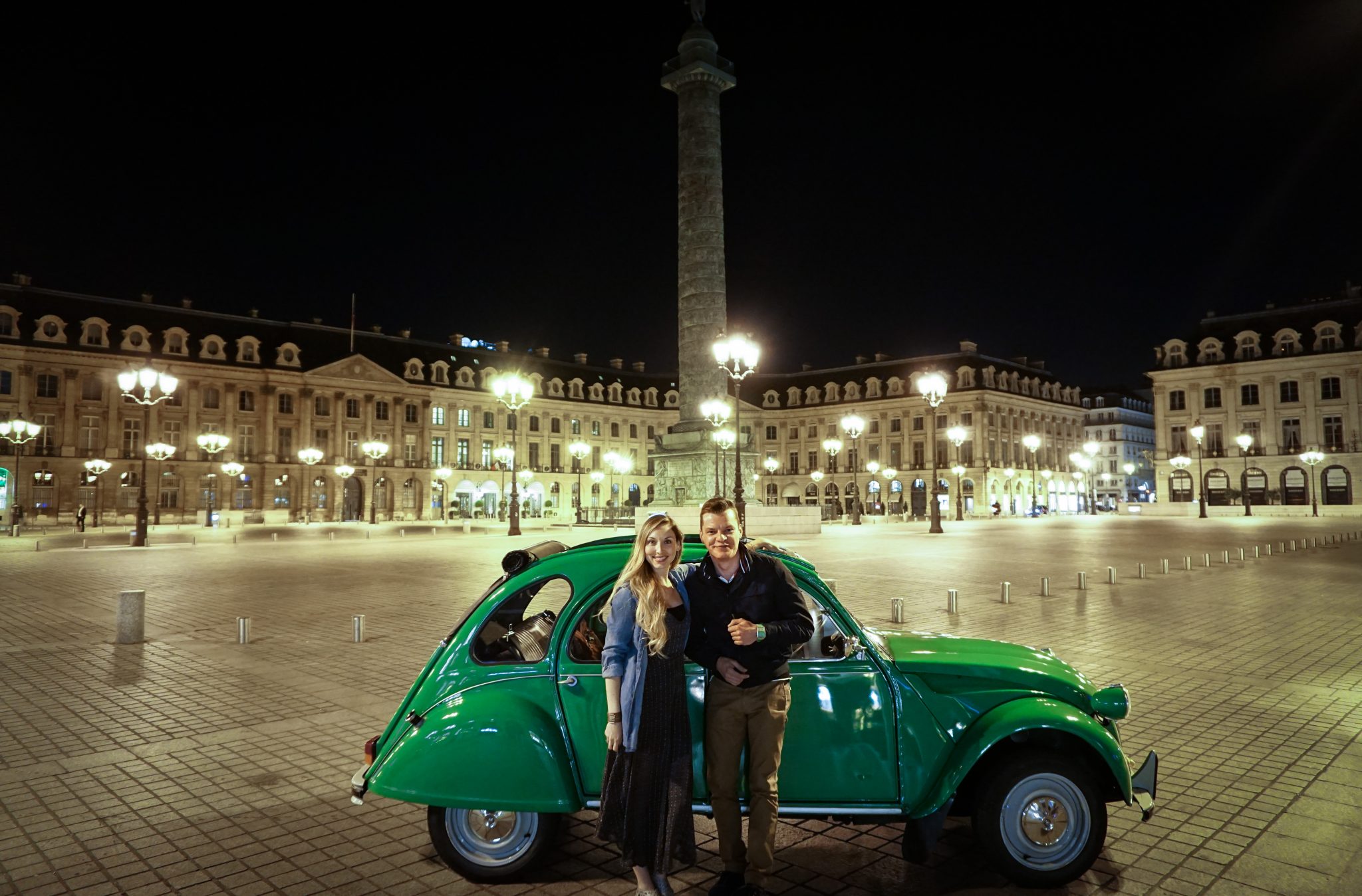 Cedric’s Paris Tours can vary from 1, 2, and 3 or more hours in duration, can be taken day or night, and they offer different themes depending on your preference. The beauty of Cedric’s Paris Tours, is all tours are done in an adorable old 2CV car (who all have names) and the tour guides are born and raised in Paris. The four car fleet is owned by the guides and they never use advertisement on their vehicles, which is another reason I chose this company. If I’m going to ride around in a car and take pictures, I want it to look authentic. Chris, for example, drives his car every day as his personal vehicle, so it is treated like his baby and extremely well cared for.

Many of the men who have created and joined this tour team are former firefighters, so a portion of their tour revenue is donated to orphans of firefighters. In addition, firefighters get 10% off tours. The interior of the cars have firefighting patches from all over the world, so if you know a firefighter, bring a patch with you to donate to their collection!

I was lucky enough to take a 2CV private paris tour not once, but twice in 2017. After taking this incredible Paris tour in March during my overnight layover, I couldn’t resist a second time when I revisited Paris with my boyfriend in December. This time I was able to experience the tour during the day in a different car and with Cedric as my guide.

This time around, instead of seeing the main tourist sites, we drove through smaller neighborhoods, saw incredibly old homes, learned of secret little remnants of history whose mark still remains, and visited some of the most picturesque spots for photo ops.

I’m torn between recommending one of Cedric’s private Paris tours during the day or at night. They both offer spectacular sights in different ways. You can cover more ground later at night because there is less traffic but you can see more during the day. Either way you decide to go, you won’t be disappointed by the private tours. Paris is truly the most romantic city.

Don’t hesitate to contact Cedric and his team no matter what brings you to Paris or how long you’ll be there. They will make your tour unforgettable and personalized, you’ll feel like royalty, and have awesome photos to remember it by. You can read reviews on TripAdvisor HERE and see other guests’ photos. Check out Cedric’s 2CV Paris Tours website and beautiful photos HERE. Trust me when I say, your time with Cedric’s Paris Tours will be time well spent making unforgettable memories. Don’t miss out on the most unique tour in Paris. Please mention my blog when you book and tell them I sent you!